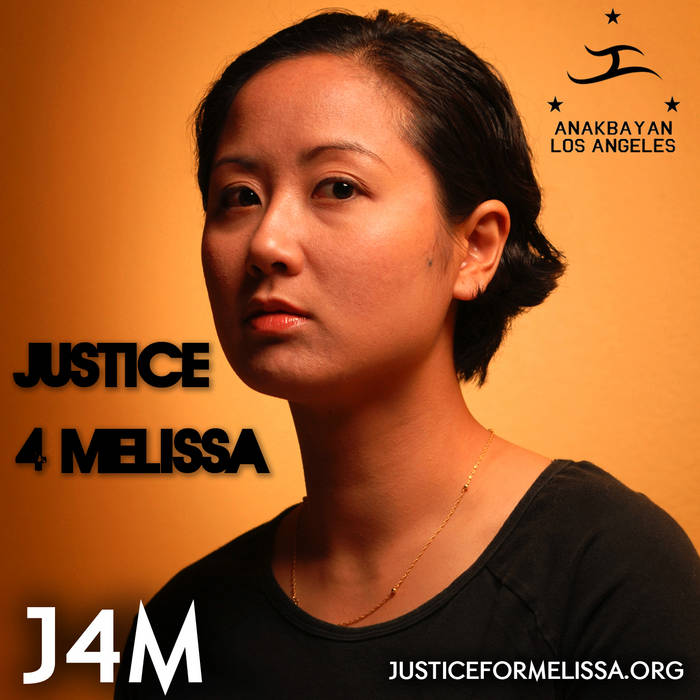 This song was made by members of Anakbayan LA in commemoration of the second year anniversary of the abduction and survival of Filipino American human rights and health worker, Melissa Roxas.

Justice for All Victims of Human Rights Violations in the Philippines!

kidnappin innocence, an' callin em' guerrillas
Philippine military butchers an' killas
the judge was bribed, president kept it hidden
the media forgot, but the people didn't

the whole world shouting "Justice for Melissa"
end the abductions, and prosecute the killas
fight injustice anywhere it shows
power to the people, cuz revolution grows


ReVision
So what you gonna do, just sit back and watch?
Gotta flip the pyramid from the bottom to the top
Hold the ones accountable responsible for actions
Corruption: the common denominator, fractions


Jedi
Puppets trying to haunt so we resist against the beast
Tax dollars to oppress, exploit and to repeat
Feel the pain of Melissa justice covered by the sheets
Abducted blind folded right on May 19th

Butcher man thinks his proof would fix the situation
Piling the guap when they say It's for the nation
Stop selling our pride no more room for lies
In the classroom what happened to the food for minds?

But instead we using army fatigues
Disappearances and victims killed off by elites
Never stopping fist pumping justice we call
Until this beast is put down freedom for all!


Intellect
The military still strapped with a .8
Mr. Butcher on the run for a package of weight
After the resolution, the decision spat in her face
Corruption run away, but they wind up back in their place

Big warlords, snake like slumlords
I shout justice at the top of my vocal cords
Y'all feel me, they label us as enemies
Uzi on their waist, arms long like a centipied

The committee on human rights say the same shit
Pullin' no evidence, they kill with the same clip
Hidden suspect in the shadows of times
Committin' torture crimes, goin' out of their minds

Distractin' folks from the real enemy
is still the same, the Philippines AFP
'Till then, it's Justice for Melissa
Puppets hangin' by the thread, the real killers

Bandcamp Daily  your guide to the world of Bandcamp

Khruangbin and Greg Foat stop by with their amazing new LPs.